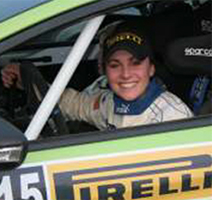 10 Years Ago – Success for Molly Taylor in British Rally

We head back 10 years to June 2011, for a look at club member Molly Taylor’s early success…

They say ‘third time lucky’ and it has proved true for Australian rally driver, Molly Taylor, who has posted a confidence-building result in the third round of the British Rally Championship after posting DNFs on the previous two rounds.

The 22-year-old Sydneysider and her Queensland-born co-driver Rebecca Smart finished second in the Fiesta Trophy in their Fiesta R2 and 13th outright in the Pirelli International Rally in Carlisle.

The pair were in 21st outright after the first two stages of the event, run on Friday, April 29, and then slowly made their way through the ranks during a marathon 10-stage battle on Saturday.

“The roads were so fast and I really enjoyed driving them,” Molly says. “We had two flats in the morning stages on Saturday, but made a lot of progress in the afternoon. We’re really happy to get a BRC event finished after our bad luck in the previous two. The next goal was to be in the top three in the Fiesta Trophy and we finished second, so we’re extremely happy!”

The Aussie duo had a marathon six-hour drive to London as soon as they finished the British round so they could catch a flight to Italy for this weekend’s second round of the 2011 WRC Academy Cup. It will be run during the full WRC Rally d’Italia Sardegna (May 5-8).

There are three full days of competition in Sardinia but the Academy field will contest just two days. They spend the third day with their Academy tutors, reviewing their performance in readiness for the next round.

The two Australians are hoping to improve on the eighth position they posted during their debut in the first event of the Academy Cup, the Rally de Portugal in March.
All Academy competitors drive identical Ford Fiesta R2s with a Pirelli control tyre. Molly has bought an identical car for the British series, to ensure better preparation for the ‘main game’.

The British event started and finished at Carlisle Racecourse, kicking off with two 11km runs through Newcastleton Forest on Friday evening, punctuated by an autograph signing event in Newcastleton village centre. Following the overnight halt, a further 127km, split into 10 competitive stages, were tackled on Saturday, all of them taking place over the dry and dusty gravel roads in Kielder Forest.

The fourth round of the Dulux Trade MSA British Rally Championship sees teams swap from gravel to asphalt roads, when they head north of the Scottish border for the Kelso-based Jim Clark International Rally on May 27-28.